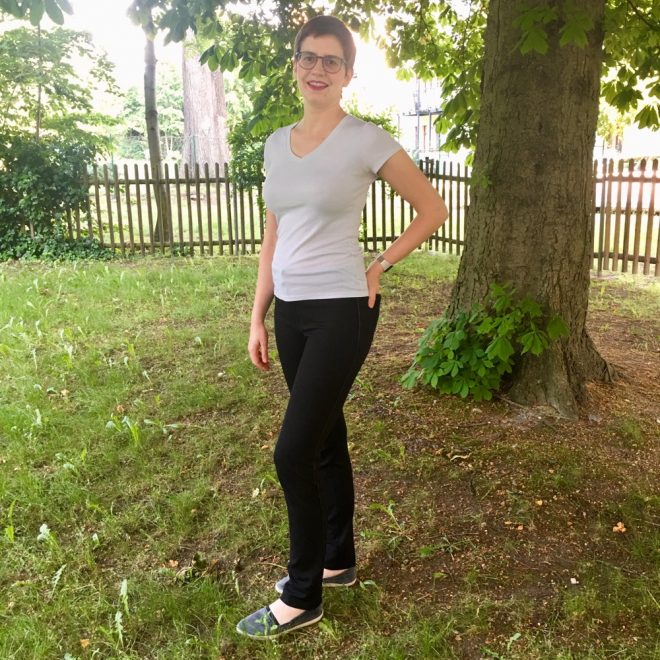 I found the fabric, a stable viscose-based ponte knit, at a local fabric store and immediately got to work. Usually, fabrics sit around in my stash before finding use, but this one was processed in record time!

To add a little visual interest, I added a narrow strip of black faux leather in the outseams.

I made a few alterations to the pattern, mostly to accommodate the ponte fabric:

Since the pattern fit me well straight out of the box, I didn’t have to change it much in terms of fitting. I lengthened the front and back crotch a little because I found my denim pair to be a little tight there.

I decided to sew darts instead of the back yoke. The process of converting from one to the other is pretty straight forward:

I used my serger with a standard four-thread wide stitch to sew most of the seams (in- and outseams, crotch seam, constructing and attaching the waistband). I used a normal straight stitch on my sewing machine to sew the front fly and darts and to top-stitch the inseam, waistband and back pockets. Since I left off the front pockets and belt loops, they came together pretty quickly.

For the hem, I opted to do a hand-stitched blind hem. Of course, a machine blind hem would work as well, but – like I mentioned… I actually found that the ponte fabric also stretches enough vertically that I had to trim 5cm/2in off the leg length.

Instead of a jeans button, I used a trouser hook and bar. It works, but there’s definetily a little bump caused by the fabric pulling. In the future, I might move the zipper to a side seam and use a small hook and eye to secure it.