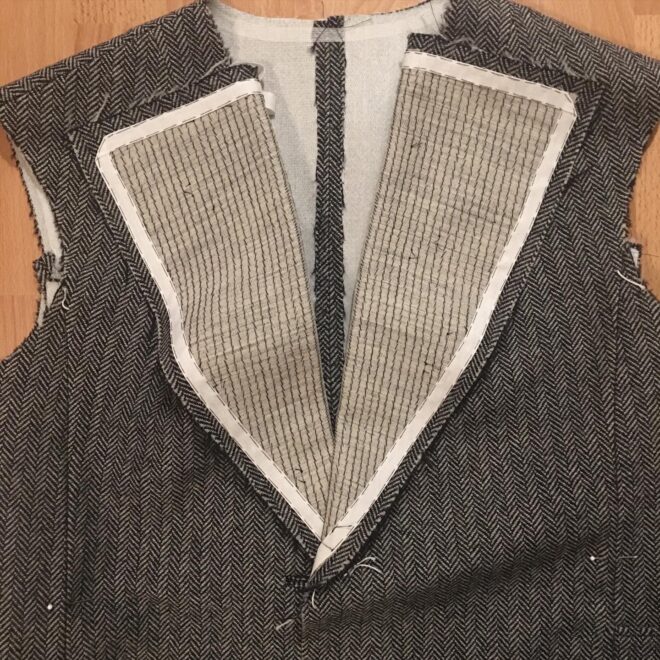 There are two projects I need/want to complete at the start of the year. First, I want to finish my VikiSews Diana coat. At the time of this writing, I estimate I’m about 25%-30% done with it. I still need to sew the sleeves, tailor and sew the undercollar, cut out and sew the lining (and finally decide on what to use to interline) and add some smaller details like belt and belt loops and a strip of silk bias tape to go between the front facing and lining.

Before the end of February, I also need to make a dress. I’ll be a bridesmaid in the wedding of some close friends of mine in early May and I get to sew my own bridesmaid dress for the occasion! Due to other events (see below), I need to have this done by the end of February. I recently got the swatches for the color I need to match in the mail and bought some fabric. Now I need to find or draft the pattern and get sewing!

I’ll also be making the ring pillow for the wedding and I have a fun idea in mind that relates to one of my friends’ hobbies.

In the first half of March, we’re moving to Austria. Since moving to Germany a little over two years ago, we’ve already accumulated a lot of stuff (including all my sewing gear), so this will probably be pretty exhausting and I won’t have any time to sew.

In the second half of March and all of April, we’re traveling to the US and Mexico. My husband’s family is in the Midwest and we’re going to visit them and then go on a four-week trip to Mexico in the van we converted to an RV. Needless to say, I won’t be able to sew in such a small space. But I’m planning to knit an Aronia sweater by Aistė Butkevičienė while we’re on the road.

After attending the wedding in early May, we’re coming back to our new home in Austria. Our newlywed friends will actually come with us to spend their honeymoon in Austria and Czechia. After we see them off again, I’m planning to set up my new sewing studio in the new apartment! It’ll be a big upgrade for me, because I’m currently sewing in a corner of our living room. The new studio is 16.5m2 (178ft2). I can’t wait to finally be able to have both machines set up permanently!

Once that’s done, I’ll have two “urgent” projects: First, I want to finally sew my first usable bra. I have a RTW bra model I love and I’m planning to sacrifice one of them to make a pattern out of it. I’ve sewn one bra before, but the sizing was way off, so unfortunately, it’s not usable, but at least I learned how to put one together!

I also want to make a pair of hot pink Ginger Jeans. The pattern fits me quite well and the pink will be a versatile addition to my wardrobe. I’ll just have to avoid wearing them with my pink jean jacket… Sourcing pink stretch denim may be a challenge, so I might end up dyeing white or undyed denim.

On my last visit to the US, a friend of mine let me have a couple of her vintage sewing patterns and I finally want to make one of them up! It’s a fully lined fall/winter dress with raglan sleeves (McCall’s 7497). I already have fabric for this project (a navy-and-white tweed from Zuleeg). The pattern is a bit too small for me according to the size chart, so I’ll have to make some adjustments.

Judging by the state of my current RTW t-shirts, they’ll be pretty worn out in a year’s time. I want to take the time to create a great pattern for basic layering t-shirts and sew at least 5 of them, to replace my current rotation. They’re from Uniqlo and have served me well. But they’re too narrow in the shoulders and are all at least 4 years old already.